Special shout out to MLBTRADERUMORS.com for putting together their list of top 50 MLB free agent predictions.  They have inspired me to come up with my TOP 50 MLB Free Agent Predictions as well.  So read, discuss, and enjoy!!!! 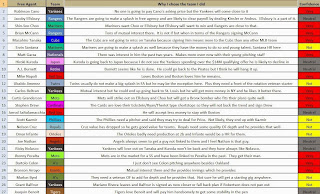 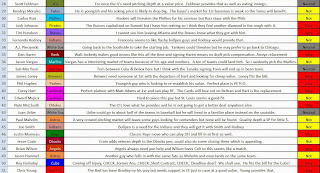 ·         Rick Renteria is the new manager of the Chicago Cubs signing a 3 year deal with 2 option years.

·         The Cubs signed OF Aaron Cunningham to a minor league deal.  You can see Aaron’s stats here.  Could be a nice bargain or platoon player if he makes a splash in Spring Training.

·         Cubs Den lays out 5 starting pitchers the Cubs should consider.  Love the list and would approve of any especially Tanaka and Johnson.  But there is one pitcher I would like to add to his list; Roy Halladay.  Doc maybe coming at a discount because of his age and declining numbers but he is worth the gamble for sure.  He can look to increase his value on a non-contender like the Cubs and end up with the fate of so many other pitchers over the past 2 years.  Get dealt to a contender at the deadline. Amazinavenue does a great run down of Roy Halladay for the Mets.  Which tells me how does he not fit for the Cubs?

·         MLBTR.com last out some non-tender candidates which has Darwin Barney, Mat Gamel, and Daniel Bard as the only Cubs on the list.  Bard and Gamel are very possible but Barney has good trade value as a defensive minded middle infielder.  No way Barney is non-tendered.

·         In that same post atMlbtraderumors.com they have some names that if they are non-tendered could interest the Cubs like OF John Mayberry, OF Nolan Reimold, OFJustin Ruggiano, OF Travis Snider, OFDrew Stubbs, P John Axford, PTommy Hanson, P Daniel Hudson, and P Jonny Venters.

·         If you combined the story put out by Chris De Luca and the tweet from Bruce Levine you pretty much have the new Cubs coaching staff filled up.  De Luca says A.J. Hinch is a strong possibility as a bench coach on Renteria staff.  He says the relationship between the front office and Renteria is really good.  Where Levine states Mariano Duncan, Alex Cora, and Henry Blanco are favorites for his staff as well.  So the way I see it right now is Hinch as Bench Coach, Mariano Duncan as Hitting Coach, Chris Bosio at Pitching Coach, Alex Cora as either 1st or 3rd base coach, and Hank White as Bullpen Coach.  That basically leaves one position left open which I would love to be reserved for Ozzie Guillen but it won’t happen.

·         Keith Moreland is leaving the Cubs radio booth and my favorites to replace him start in this order: Mark Grace, Doug Glanville, Todd Hollandsworth, Kerry Wood, Mark DeRosa, and then David Kaplan.