Players Could be on the Move...

Until Next Time…
Posted by cubsfan82 at 5:21 PM No comments:

- The Chicago Cubs completed their Theo Epstein Compensation by receiving 19 year old first base prospect Jair Bogaerts. You can find out more on the youngster here. Honestly it is a better piece than I thought we would have gotten.
- As expected the Cubs made a flurry of roster moves today by sending Randy Wells, Casey Coleman Travis Wood, Scott Maine, David Sappelt, and Welington Castillo to the minors. Non roster invitees sent to minor league camp were Blake Parker, Edgar Gonzalez, Matt Tolbert, and Blake Lalli.
- Randy Wells, Casey Coleman, and Scott Maine were big surprises for me. From these moves it looks like Rodrigo Lopez and Shawn Camp may have made the pen (another option is Corpas). Scott Maine not making the pen means the Cubs will only go with one lefty in their bullpen which is pretty interesting. I also thought either Randy Wells or Casey Coleman would make the team as a long reliever, but neither did.
- This also means Steve Clevenger gets the back-up catcher job so Castillo can catch everyday in Iowa.
- It also means that Lendy Castillo looks like he made the team.
- Jeff Samardzija landed the No. 3 spot in the rotation with Volstad nailing the #4.
- Randy Wells has been told he is the next man in for the rotation spot if there is an injury.
- The biggest non-move of today is OFer Tony Campana. I talked to my source today and he said that Theo and Jed are still working on a trade involving Marlon Byrd so they wanted to keep Campana in ML camp. If Byrd is traded that means that Campana would likely share time in CF with Reed Johnson. Again the Cubs do not want to start BJax ML clock so he will start in Iowa.
- So we know that Soriano exercised his no-trade to go to the O’s earlier this year but did you know he did the same thing with the M’s? According to my source he turned down a trade that would have sent him to the Mariners for Chone Figgins.
Until Next Time..
Posted by cubsfan82 at 3:37 PM 2 comments:

Do You Hear An Echo?? Tons of Rumors and Notes...

Some notes as we come to the end of ST-
Here is the latest from Mr. Bruce Levine-
Until Next Time…
Posted by cubsfan82 at 3:47 PM 8 comments:

-  The Tampa Bay Rays and Chicago Cubs have been rumored off and on about a trade that would send Geovany Soto to Tampa for Jeff Nieman or Wade Davis but the Cubs were not to high on either.  But now the recent success of Castillo, Clevenger, and the steady play of Geovany Soto has the Cubs and Rays back in talks.  A source told me that the Cubs are willing to trade Soto to Tampa but for prospects.  Another option he said that is being discussed is a Randy Wells and Geovany Soto for Wade Davis and Alex Colome.  This rumor is getting legs according to a separate source.

-  The Angels have been in contact with the Cubs about Matt Garza recently but the Cubs are currently trying to work out an extension with the ace.

-  The Reds are very much interested in Carlos Marmol and have contacted the Cubs but they are hesitant to trade Marmol because of bullpen concerns of their own.

-  The Braves have been in contact the Cubs about Blake DeWitt, Jeff Baker, and Marlon Byrd according to sources to help with their depth and injury woes.

-  One source told me if the Cubs do not make any trades before Opening Day he will be "shocked" because all of the things they are working on. 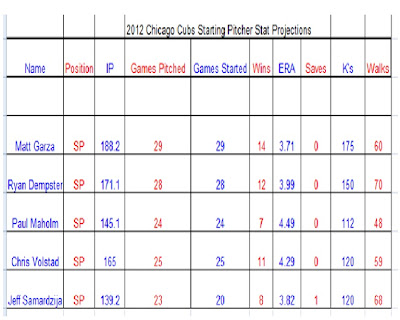 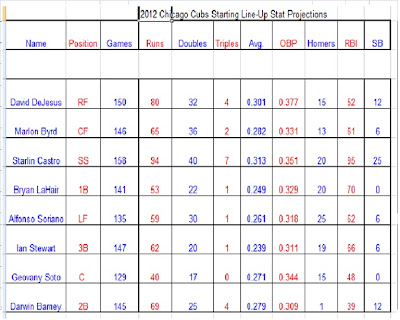 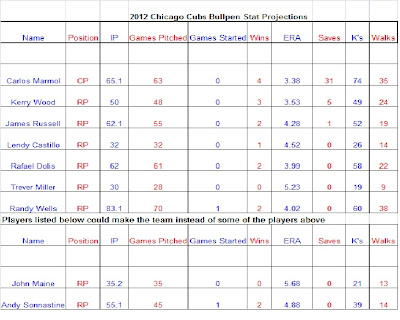 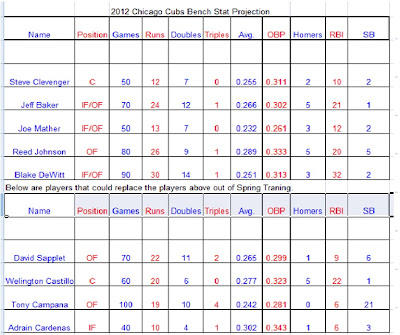 MAKE SURE TO CLICK ON EACH PICTURE TABLE TO GET A CLEAR IMAGE OF THE STAT PROJECTIONS. (A SPECIAL THANKS JAMES FOR THIS TIP!!!!)

All stat projections are subject to change because of roster moves such as trades or demotion, position relocation, or injury.
What is your stat projections for 2012??? Just comment below to start the lively conversation!
Until Next Time...﻿
Posted by cubsfan82 at 9:26 AM No comments: